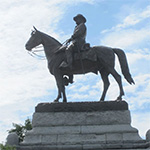 I
The bronze General Grant riding a bronze horse in Lincoln park
Shrivels in the sun by day when the motor cars whirr
by in the long processions going somewhere to keep ap-
pointment for dinner and matinees and buying and
selling
Though in the dusk and nightfall when high waves are
piling
On the slabs of the promenade along the lake shore near
by
I have seen the general dare the combers come closer
And make to ride his bronze horse out into the hoofs
and guns of the storm.

II
I cross Lincoln Park on a winter night when the snow
is falling.
Lincoln in bronze stands among the white lines of snow,
his bronze forehead meeting soft echoes of the new-
sies crying forty thousand men are dead long the
Yser, his bronze ears listening to the mumbled roar
of the city at his bronze feet.
A lithe Indian on a bronze pony, Shakespeare seated with
long legs in bronze, Garibaldi in a bronze cape, they
hold places in the cold, lonely snow to-night on their
pedestals and so they will hold them past midnight
and into the dawn. 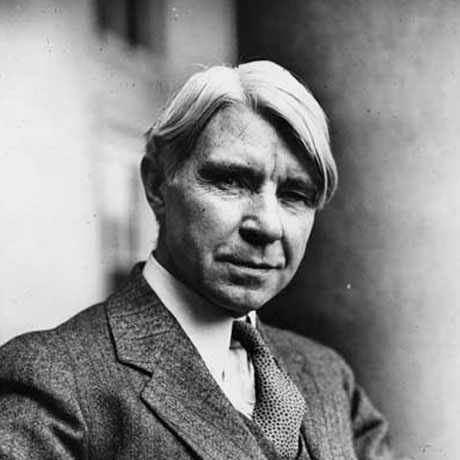 Carl Sandburg was born in Galesburg, Illinois, on January 6, 1878, to parents who had emigrated from Sweden. Sandburg left school at the age of thirteen to work odd jobs and help support the family. At age eighteen he served eight months in Puerto Rico during the Spanish-American war. Upon his return Sandburg enrolled at Lombard College, a small school located in his hometown. Four years later, Sandburg started working as a writer for various newspapers, first in Milwaukee, then Chicago. He began publishing poems in Poetry: A Magazine of Verse, and soon became recognized as a member of the Chicago literary renaissance, which included Ben Hecht, Theodore Dreiser, Sherwood Anderson, and Edgar Lee Masters. He first received a Pulitzer Prize for his 1918 volume of poems, Cornhuskers. He received another Pulitzer more than 30 years later, in 1951, for his Complete Poems. In the interim, he received yet another Pulitzer for the second part of his six-volume definitive biography of Abraham Lincoln.