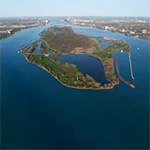 We stripped in the first warm spring night
and ran down into the Detroit River
to baptize ourselves in the brine
of car parts, dead fish, stolen bicycles,
melted snow. I remember going under
hand in hand with a Polish highschool girl
I’d never seen before, and the cries
our breath made caught at the same time
on the cold, and rising through the layers
of darkness into the final moonless atmosphere
that was this world, the girl breaking
the surface after me and swimming out
on the starless waters towards the lights
of Jefferson Ave. and the stacks
of the old stove factory unwinking…