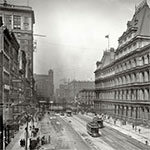 Turning among its images, your mind
Produced the names of streets, the exact look
Of lilacs, 1903, in Cincinnati,
—Random, as if your testament were made,
The round sums all bestowed, and now you spent
Your pocket change, so as to be rid of it.