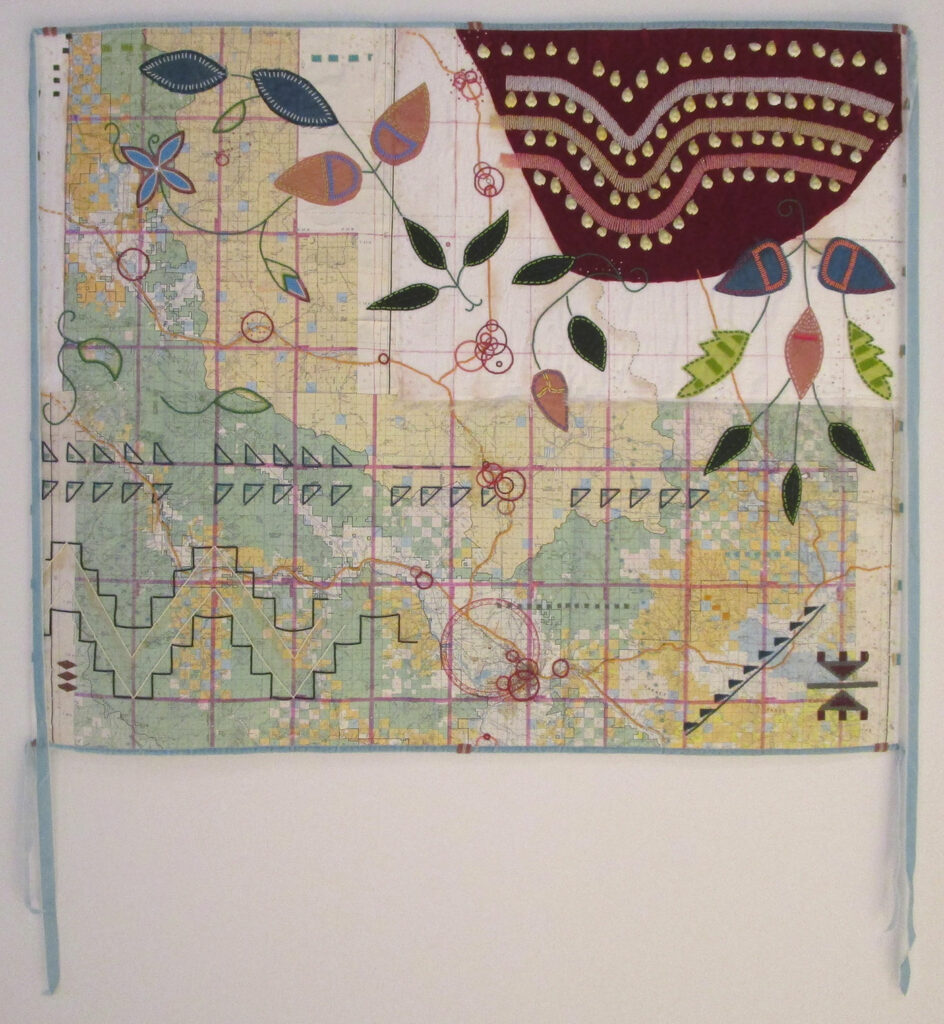 She starts with a map. In the lower
right corner, there should be a compass rose,
but how to orient in the accumulation
of such loss?

Plotted and pieced,
the green might have sheltered them
in forests of spruce and pine,
blue square of willow copse by the waterway,

goldenrod signifying the empty, endless miles—
instead the colors declare by whom
the earth is owned.
Atop the official grid,

she begins to superimpose her own designs.
Here, a remnant of red
silk-velvet, a best-dress laid upon the ground,
stitched with rows of trade bead and cowries.

If we could only read the floral patterns she has
sewn around it, the Salish, fabric leaves,
bitterroot like a birthmark,
mountain bluebell, the stems and herbal seams,

if we could enter the beaded circles
that mark where each woman at last was seen—
beside which Grief sits,
reaching her arm far as possible down the well.

Every culture seems to have a story
about a daughter disappearing into earth or sky.
The black bear overtakes her, a snake
bites her, a white swan slowly spreads his wings.

In the end, it is always said to be her fault—
she was drinking, she was hitchhiking, she was too beautiful,
she was with a man. She is dragged
to the underworld or sent to live with the stars.

In the worst places, the circles cluster
like a ring toss. Everywhere, the highways expand,
their yellow lines the danger zones the women
crossed in common.

In truth,
the map still begs for their return. I stood outside
the capital and watched a mother cry.
Wind through her hair enough to break my heart.

The Book of the Missing

The winding cord of highways, unkempt
gravel roads and the trails of animals–
a record of who and what has passed over,
an agony of secrets.

In the end, they have all borne witness,
eyes like glass beads that can never blink.
The dull light of motel neon shines ominously.
An engine growls across the landscape.

Brittle men who are splintered like glass
thrown from a second story window
and we are the room they leave behind.
They are pathetic husks, feeble in spirit.

Fragments fall along fields and shallow ditches,
in overlooked alleyways or underpasses.
A cold, empty breeze rising from the debris.
The first and last moment of her.

It is rage that pulls her up from this place.
She spews out the wretched and miserable
as particles of dawn-lit soil illuminate her skin.

Her hair is a two-edged sword.
She stitches together the collective story of origin,
her body a map: descended from the stars,
on the backs of animal sisters,
carried to safety in a bird's beak.