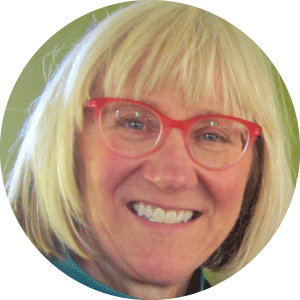 Born in Poplar, Montana, Chrysti “The Wordsmith” Mueller Smith developed a passion for words into a career while obtaining her undergraduate degree in Sociology/Anthropology at Montana State University in the 1990s. Chrysti the Wordsmith, Smith’s daily, two-minute audio interlude that provides history and context for words and phrases can be heard throughout Montana and beyond on KGLT-FM Bozeman, Yellowstone Public Radio, Montana Public Radio, KCPR in Salt Lake City, Utah, and Armed Forces Radio and Television Network, broadcast worldwide. In addition to her daily show, Smith has spoken for the Montana Newspaper Association, the Montana Library Association, the Greater Yellowstone Coalition, and was a presenter for Humanities Montana Speaker’s Bureau. Smith is the author of two books, Verbivore’s Feast: A Banquet of Word & Phrase Origins and Verbivore’s Feast: Second Course. 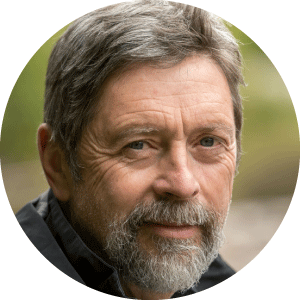 Jim Robbins began his writing career over 40 years ago. As a young journalist in Helena, he joined the national roster of free-lance journalists working for the New York Times in the 1980s. Over time, Robbins proved an indispensable reporter for the Times on the most relevant topics of our time, with a special interest in science and the environment in the American West. He is still a frequent contributor.

Most recently, Robbins’s work can be found in the prestigious on-line journal, Yale Environment 360, analyzing issues of a changing world including water policy, green hydrogen, traditional ecological knowledge, the global decline in snow cover, the mega-drought in the Southwest, environmental DNA analysis, the ecology of dust, and the decline of the world’s boreal forest.

He has covered environmental stories in far flung places as well, including Mongolia, Mexico, Chile, Peru, the Yanomami Territory of Brazil, Norway, Sweden and other countries.

He also has a deep interest in, and has written extensively on, the frontiers of neuroscience and perception.

From 1993 to 2017, Robbins authored or co-authored six books: The Wonder of Birds: What They Tell Us About the World, Ourselves and a Better Future, [which won the 2017 Montana Book Award] The Man Who Planted Trees: A Story of Lost Groves, the Science of Trees, and a Plan to Save the Planet, The Open-Focus Brain: Harnessing the Power of Attention to Heal Mind and Body,[with Dr. Les Fehmi, about the critical and overlooked role of attention in our lives] Dissolving Pain: Simple Exercises for Overcoming Chronic Pain, A Symphony in the Brain: The Evolution of the New Brain Wave Biofeedback, and Last Refuge: The Environmental Showdown in Yellowstone and the American West. Robbins’s books have been reviewed well, widely read, and translated into numerous foreign languages. 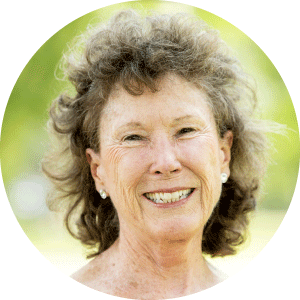 Dorothy Bradley, a lifelong resident of Bozeman and retired in Clyde Park, has been affecting change on Montana’s humanities landscape for over five decades. After obtaining a bachelor’s degree in anthropology from Colorado College, Bradley, at age 23, was elected to the Montana House of Representatives, served her first term as the only woman in the House, and continued from 1971-1978, offering her leadership on topics such as natural resources, tax reform, appropriations, telecommunications, and economic development. After her first tenure in the state legislature, Bradley earned her Juris Doctor from American University in 1983. She returned to the Montana House of Representatives, serving from 1985-1991. In 1992, Dorothy Bradley was elected the Democratic nominee for Governor—a memorable campaign in which she rode her horse across the state. Following that campaign, she worked briefly as a rural schoolteacher, then as the Director of the Montana University System Water Center, and finally as the Gallatin County Court Administrator with the task of collaboratively redesigning the criminal justice system. She has served on a number of boards, including the Montana Health Care Authority, NorthWestern Energy, and One Montana, and an advisory council of American Prairie Review. Most recently, Bradley’s decades of service to Montana culminated in the publication of To Make a Better Place For this and Future Generations, volume 43 of Public Land & Resources Law Review. In creating this publication she collected and edited stories from 20 fellow activists and political leaders from the ‘70s, a particularly visionary and productive time of Montana history, and included two stories of her own: Earth Day 1970 and The Great Debate. 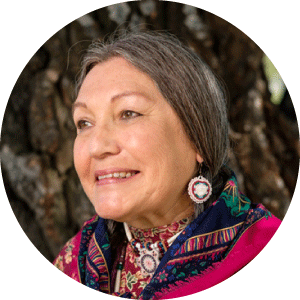 Dr. Janine Pease, an enrolled member of the Crow Indian Tribe, was born on the Colville Indian Reservation in eastern Washington before coming to Montana. While in Montana, Dr. Pease has played a crucial role in the state’s understanding of American Indian tribal colleges, Native American education, and native language restoration. After serving as the director of the Crow tribe’s Adult and Continuing Education Program, Dr. Pease founded Little Big Horn College, a public tribal community college on the Crow Indian Reservation in Crow Agency, Montana. She advocated for the college’s funding and served as the college’s first president from 1982-2000. Under her leadership, Little Big Horn College has grown from a one-room school with 32 students into an accredited two-year community college that sits on two acres and serves over 300 students per term. The Little Big Horn College library is home to an invaluable archive of Crow history and culture that serves the entire Crow community in Montana and beyond. After her time at Little Big Horn College, Dr. Pease continued to work with and influence several Montana colleges and universities, including Eastern Montana College (now MSU-Billings), Rocky Mountain College—where she served as Vice President of American Indian Affairs, and Fort Peck Community College. Dr. Pease has also worked with several colleges and universities all over the western United States. Her work earned her appointments from former president Bill Clinton to the National Advisory Council on Indian Education and the White House Initiative on Tribal Colleges and Universities Advisory Council.

Dr. Pease is also a widely published author. In 2015, she co-authored American Indian Stories of Success: New Vision of Leadership in Indian Education with Linda Warner, Gerald Gipp, and James Stanley. She authored a bi-weekly column for Big Horn County News, “Baawaa’lilaau – Gives Advice,” on early childhood literacy, language learning, school-aged and higher education from 2013-2017. In 2006, the Leadership conference on Civil Rights commissioned Dr. Pease, Laughlin McDonald, and Richard Guest to co-author “American Indian Voting Rights in South Dakota- 1982-2006.” The W.K. Kellogg and Lannan Foundations and the American Indian College Fund commissioned Dr. Pease to research indigenous language immersion initiatives, resulting in the 2003 publication of “Native American Language Immersion: Innovative Education for Families and Children.” She has published several articles in the Tribal College Journal of American Indian Higher Education and the American Indian Education Journal. Currently, Dr. Pease working with eight tribal and local historians to publish a reference volume, The Story of the Crow Indians: From the Past to the Present, set to be published in 2024.

In addition to her inspiring work in education and publishing, Dr. Pease is a fierce advocate for Native American rights, history, and culture. In 1986 (then Janine Windy Boy), she acted as the lead plaintiff in a voting rights litigation against Big Horn County, Windy Boy v. Big Horn County, resulting in greater political power for Native Americans in eastern Montana. Since 2015, Dr. Pease has been a board member of the Crow Language Consortium, which is a collective of Crow schools, colleges, and educators working to preserve Apsáalooke—the Crow language—by developing language materials, providing access to apps and multimedia, and organizing intensive teacher trainings and workshops. Her work in this field has resulted in six annual Crow Language Summer Institutes, a Crow dictionary, and the Natural World Series—a series of children’s picture books that provide lessons about the natural world through a Crow perspective. Dr. Pease is the recipient of many awards and honors throughout her career including, but not limited to, the National Indian Educator of the Year, the MacArthur Fellowship, and the ACLU Jeanette Rankin Award. 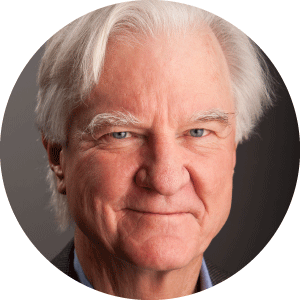 Jim Scott was born in 1949, the youngest of five siblings in Sheridan, WY. He grew up in Sheridan, attending grade school and Jr High School and in the summers lived near Dayton, WY on the Padlock Ranch. Jim attended Fountain Valley School in Colorado Springs for high school and then the University of Denver and the University of WY. His strongest academic interests were the humanities related subjects, history, political science, sociology, literature, and music.

Jim married Christine Matheson in 1972. Chris had grown up in Lexington, MA and shared many of Jim’s interests. They moved to MT in 1976 where Jim began his 45-year career as a banker, had three children and began lives of community engagement.

In the 80’s, Jim was involved in Billings Centennial, downtown urban planning, the Great Montana Centennial Cattle Drive, and the MT Tax Reform Coalition (inspired by Dorothy Bradley). He began a long-term commitment to the performing arts participating in the early days of transforming Billing’s Fox Theatre into the Alberta Bair Theatre, an institution he continues to support as it continues to transform. Among other interests, Chris loved historical preservation and participated in the significant renovation of the Yellowstone Art Museum.

In the 80’s, Jim and Chris began a lifelong commitment to science-based conservation through their involvement with the Nature Conservancy. Jim and Chris co-chaired the MT Chapter of TNC. Chris then went on the TNC Global Board and then affiliate Boards in Argentina and California.

In the 90’s Jim became heavily involved in philanthropy, founding the First Interstate Foundation and chairing the Homer and Mildred Scott Foundation upon the death of his father. He chaired the Board of the Northwest Area Foundation in St. Paul and was an early board member of the board of the Montana Community Foundation.

Jim was greatly influenced by growing up on and near the Crow Indian Reservation. In the late 80’s he met his close friend Harvey Stewart who was minister in Lodge Grass. Jim and Harvey began working with Janine Pease who was then the president of Little Big Horn College. In addition to working together on community and economic development, Janine encouraged Jim to serve on the board of the American Indian College Fund, which he did for nine years.

It was on the board of the Montana Community Foundation that Jim met Elouise Cobell. Elouise was a Blackfeet leader responsible for her tribe chartering the first tribal owned bank in the country. Elouise and Jim had common interests. Elouise joined the board of First Interstate Bank and The Nature Conservancy Montana board. Elouise was also a fighter, filing the largest class action suit in history against the US Government for mismanagement of individual Indian trust assets. Elouise’ suit was finally successful gaining over four billion dollars for wronged Native people, shortly after she died from cancer in 2011.

“I have had the gift of meeting some amazing Native people and families. I am deeply moved by their ancestor’s stories in the development of our country, by their economic and cultural reality today and their commitment to achieve a more just future.”

The Foundation that Jim, Harvey and Chris began in the 90’s called the Foundation for Community Vitality (FCV) has been the primary vehicle for supporting leaders and communities on the Crow, Northern Cheyenne and Blackfeet Reservations. Jim and Chris’ daughter, Courtney Scott, became the Chair and Program Director for FCV in 2020. FCV has many friends and partners making a positive difference for the future. Those partners include, Peoples Partners for Community Development in Lame Deer, Plenty Doors Community Development in Crow Agency, Little Big Horn College, the City of Lodge Grass, Wyola Public School, Blackfeet Indian Conservation Land Trust, Hopa Mountain, and more.

Jim and Chris Scott are leaving a lasting impact on the legacy of public humanities throughout Montana.